Please become a Patreon of my work. You get special videos just for Patreons. You also support my website and YouTube work. Just check out the two tiers and decide what you might want as value benefits. Just click the link below…

Why do I need alkaline fixers?

I think it's pretty well known now that alkaline fixers are preferred if you are using Pyrogallol or Pyrocatechin film developers.

What might not be so well known is that they are also useful for Chloro-bromide warm tone papers and lith printing where it helps maintain optimum warmth and improves on the delicate highlights. However, alkaline fixers can be used with any film, developer, or paper especially if easier archival results are wanted.

So why do I mention archival results? Why does an alkaline fixer make them easier? Well, alkaline fixers wash out of film and paper more readily and are safer when you want to guarantee that you've removed all the fix from your film or print.

These fixers are also to be recommended if you expect to tone your print.

Another advantage of alkaline fix is that it has little or no bleaching properties and is safer to use for longer fixing times on films and paper. Basically, we should all be using these fixers for everything!

Alkaline fixer for film or paper (TF-2 by Bill Troop)

This Alkaline Fixer washes out of the film and paper readily and is useful for maintaining the stain when using staining/tanning developers. If keeping quality is not required, the Sodium Sulfite can be left out but the fix will only last a day.

With the advent of "I haven't enough hours in my day" folk have become addicted to rapid fixers. These use Ammonium thiosulphate as their fixing agent. I have included one below. Note, this is the preferred fixer for modern T-Grain films such as T-Max and Delta.

• Dilute 1+4 for both film and paper
• Keeps for 3 months as stock
• Good for staining/tanning film developers
• Fixing times:

For your convenience I supply developers and alkali fix here.

Below is my video on water stop baths and correct fixing technique. 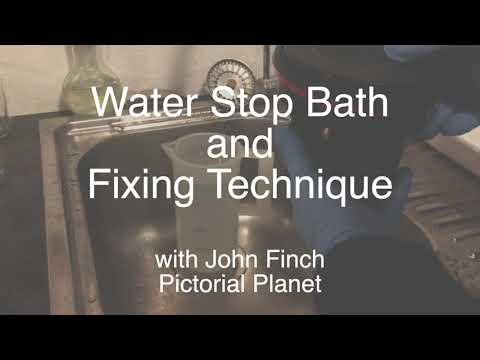